While some may think Australia doesn’t have its own cuisine, we strongly reject that statement. The Great Southern Land has plenty to offer when it comes to iconic Australian foods. And while you’re here it would be rude not to try them all, right? So here are 17 foods that you have to try while you’re living and studying Down Under.

Our fine selection of ‘bickies’ (biscuits)

Some call them cookies (lol), but we refer to them as bickies.

Who doesn’t love a sweet baked treat with their morning tea or as an afternoon pick-me-up? Australia definitely does, and we show it. When it comes to the biscuit game Arnott’s definitely takes the crown.

While we can never agree on Australia’s favourite Arnott’s treat, we suggest going for an assorted packet, or trying the always popular Iced Vovo and Mint Slice. One thing is for sure, you have to try a Tim Tam.

While the beloved Tim Tam comes in a wide variety of flavours, we suggest you go for the original. It just can’t be beaten. With your Tim Tams secured you now must partake in the Australian ritual of a Tim Tam Slam. Follow this video for instructions on how to do so.

P.S. Another method involves biting off the diagonal corners.

Continuing on with baked goods, a lamington is a quintessential part of the Australian diet. While the roots of the lamington are fought over, one thing we know for sure is that it was named after Lord Lamington.

These square shaped pieces of fluffy sponge cake dipped in chocolate and sprinkled with desiccated coconut are mouth-watering. They can also controversially be filled with jam, however we will let you decide your stance on that one.

While you can buy lamingtons from a supermarket we suggest going to a bakery in the morning and grabbing one while they are fresh. It is worth it.

Our abundance of lollies

Australia has a serious lolly addiction and we have the means to feed it. Australia’s favourite brand is probably Allen’s, a front runner when it comes to all things sugary. And with their wide range of well known lollies you have plenty of options. Our top picks are Minties, Fantales, Red Frogs, Freckles, Snakes, Killer Pythons and Jaffas. Or you can never go wrong with a Classic Party Mix.

Pavlova may just be the most controversial item on this list, but we just had to include it. While Australia fiercely claims this meringue-based dessert as its own, New Zealand also stakes its claim. In a rivalry unlike any other between the two neighbouring countries – possibly only outranked by the rugby – we are going to stay out of the disagreement and just say you need to try it.

Vegemite’s worldwide reputation has probably already preceded it, but Australians can’t get enough of this yummy spread.

While not all Aussies are Vegemite’s biggest fans it would practically be a crime to not give Vegemite a try while you’re in Australia. Before you turn your nose up in disgust, hear us out. Enjoying Vegemite is all in the way you consume it.

Start with a piece of buttered toast and lightly smear the Vegemite on top, or if that sounds too scary, ease into it with a cheese and Vegemite scroll from your local bakery. You may be pleasantly surprised.

During summer, Australia is blessed with mangoes. While you may have tried mango before, have you ever tried an Australian mango? If your answer is no, you need to drop everything and make it your top priority to do so. The Australian mango is unlike any other, which is why we just can’t get enough of them. Purchased your mango but are unsure how to tackle it? No worries, Australian’s have perfected the mango cutting technique that makes eating them easy. You can watch how to cut your mango here. Australians are known worldwide for their avocado addictions. It has even been said that we love avocados so much that Australian millennials will never be able to afford their own houses because they’re too busy buying avocados. Similarly to mangoes, if you think you’ve tried an avocado, think again until you’ve tried an Australian avocado. 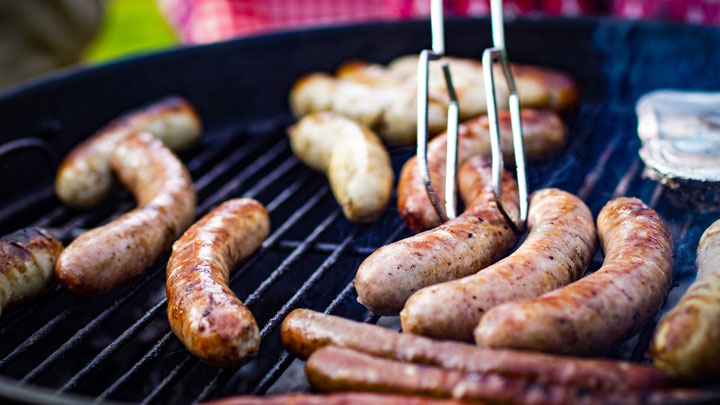 Australian food doesn’t have to be fancy to be good and a good old sausage sizzle is the perfect example of this. Take a barbecued sausage, a slice of fresh white bread, barbecued onions and sauce of your choosing (tomato or barbecue) and you’ll find the perfect combination of deliciousness.

While Student One provides you with all the barbecues you could ever need for your very own sausage sizzle, if you’re feeling lazy you can just pop down to your local Bunnings Warehouse. Bunnings has become synonymous with the classic sausage sizzle, and with just a gold coin you’ll be able to tick this one off your list, while helping a local cause.

An Anzac Biscuit – read: biscuit and never cookie – is not only a sweet and yummy bickie, but also a deeply ingrained part of Australia’s military history. While they are enjoyed year-round, these biscuits, which are primarily made from rolled oats and golden syrup, are particularly special on Anzac Day. Anzac Day is a national day of remembrance in Australia and New Zealand that honours those who served and died in all wars while protecting our freedoms and our country.

Fairy bread is a staple at the birthday parties of children Australia-wide, and has been for as long as we can remember. But just because they’re technically a children’s food, doesn’t mean we can’t enjoy it too, right? Gain insight into an Australian childhood by buttering a slice of white bread and covering it with coloured sprinkles (we call them 100’s and 1000’s). Trust us, you won’t be disappointed.

The humble meat pie is a staple at every sporting match Australia-wide. While some countries prefer their pies filled with fruit, the Aussies stick to savoury fillings accompanied by a generous serving of tomato sauce. While it’s always a safe option to go for a classic steak filling, there are lots of varieties in the pie market. Other popular flavours include steak and mushrooms, and chicken and vegetables.

Streets is responsible for the ice creams that defined many Australians’ childhoods. Bubble O’ Bills, Golden Gaytimes, Paddle Pops and Callipos are all essential ice creams you need to try for a truly Aussie experience.

Malted barley doesn’t sound like the most appetising thing, but we can assure you it is the tastiest form of barley that one can consume. Milo is intended to be mixed with hot water and milk, but can be enjoyed in many shapes and forms. Some of our favourite methods include heaping teaspoons into a cold glass of milk, sprinkled over ice cream or cereal, or spooned straight into your mouth from the famous green tin. We also hardly ever stick to the recommended serving size.

Chips with (almost too much) chicken salt

Everybody likes their hot chips, but Aussies love their hot chips. Especially thick cut chips covered in chicken salt. What exactly is chicken salt? Well, it is a delicate blend of herbs and spices mixed into salt and intended to be sprinkled over every hot chip in Australia. There is a very high chance you will never go back, so if you ever venture away from Australia be prepared to BYO chicken salt.

Potato scallops (or potato cakes and potato fritters in some Australian states) are featured in every good fish and chip shop. While the name may sound like the snack contains seafood, it is actually just potato dipped in batter and deep-fried. Whatever you choose to call them we can all agree on one thing, they’re delicious. Trust us and get one. P.S. Potato scallops also go rather well with chicken salt.

Some may say that eating the animal on our own country’s coat of arms is a bit wild, but this is Australia and that is explanation enough. So try a kangaroo burger, and don’t feel bad about it. Kangaroo meat is actually incredibly healthy, packed full of protein and is one of the meat industry’s most sustainably sourced meats. 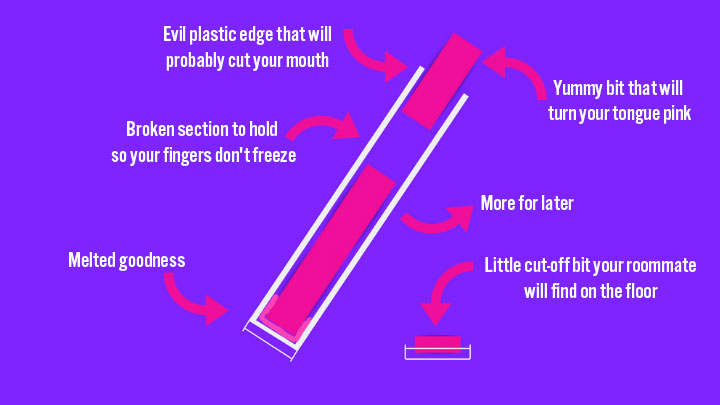 We all know the Australian summer gets hot, and what better way to cool down than with a Zooper Dooper. These frozen, flavoured ice blocks come in plastic tube packaging and are usually sold in bulk packs, unfrozen. Grab a pack at your local supermarket, throw them in the freezer and you’ll have the perfect way to cool down in no time. Fair warning, be careful not to cut the corners of your mouth on the packaging – not that that will stop you from enjoying the sweet goodness of an icy Zooper Dooper.