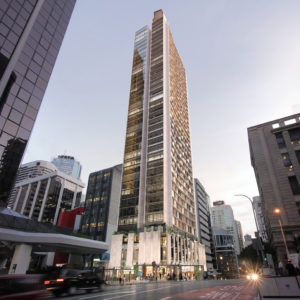 Due to open the doors to the 753-bed, 41-storey Wharf Street tower in January 2018, Student One CEO Tim Weston gave guests a sneak peak guided tour of the $120 million, 122-metre tall purpose-built student accommodation facility and announced that bookings would commence from August this year.

Situated directly opposite the company’s first accommodation residence Student One Adelaide Street launched in July 2016, Student One Wharf Street will bring the total number of available beds offered by Student One to almost 1,500. 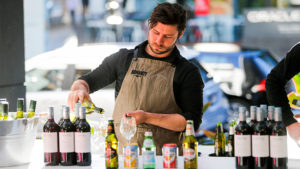 “When we welcome our first residents to Student One Wharf Street in January, they’ll have the unique privilege of being the first to live in the world’s tallest purpose-built student accommodation, surpassing the current record set by a student accommodation building located in Manchester in the United Kingdom,” Mr Weston said.
“It is a defining project for the city of Brisbane, which is a city being increasingly recognised as a ‘go to’ place to study, live and work for students from all parts of the globe”.
“Back in 2014, we recognised that education was going to become Brisbane’s biggest export, however the city needed a standard of student accommodation that matched the ever-growing expectations of domestic and international students that complemented the standard of tertiary and vocational education offered by the city’s universities and institutions”.
“We then partnered with some of Australia’s best designers and architects to create a unique student living experience that would exceed the expectations of visiting students, so they could then return to their homelands and share their stories of a world-class education experience,” he said. 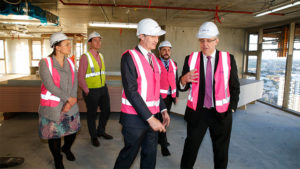 Designed by Arkhefield Architects and now being constructed by Hutchinson Builders, Student One Wharf Street will provide student residents with sweeping views of the city centre in a range of fully air-conditioned single studios, double studios and multi-share apartments, each room with large windows allowing for natural light that can also be opened to allow for fresh air.
A ground level 24-hour reception will lead up to a three-level canyon style lobby, connecting the lower levels of the building, which will also be home to four retail tenancies focussed on complementing the student amenity. 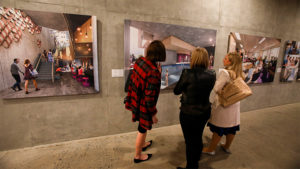 A roof-top recreation area and function space will have a capacity for 200 guests to enjoy Brisbane’s city views, as well as enjoy major events such as River Fire.
On the 21st floor, a dedicated education facility will feature music rooms, private study spaces and communal learning areas.
The fourth floor podium level recreation area will include a heated swimming pool, outdoor theatre, BBQ area and games deck, as well as a gymnasium that is 50% larger than Student One’s Adelaide Street residence. 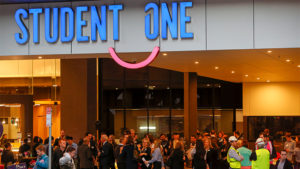 “We know that students consider a range of factors, such as proximity to their place of study, transport infrastructure and support services, when deciding on where to live while studying. In student accommodation, they are looking for socially vibrant, inclusive and safe environments equipped with the latest technology and high-quality amenities, and that is essentially what Student One offers,” Mr Weston said.
By 2019 when Student One launches its third student residence, a 900-bed twin-tower facility located on Elizabeth Street in the city’s CDB, the accommodation provider will offer 2,400 beds, taking pressure off educational institutes as well as rental stocks within a 10km radius of the city.