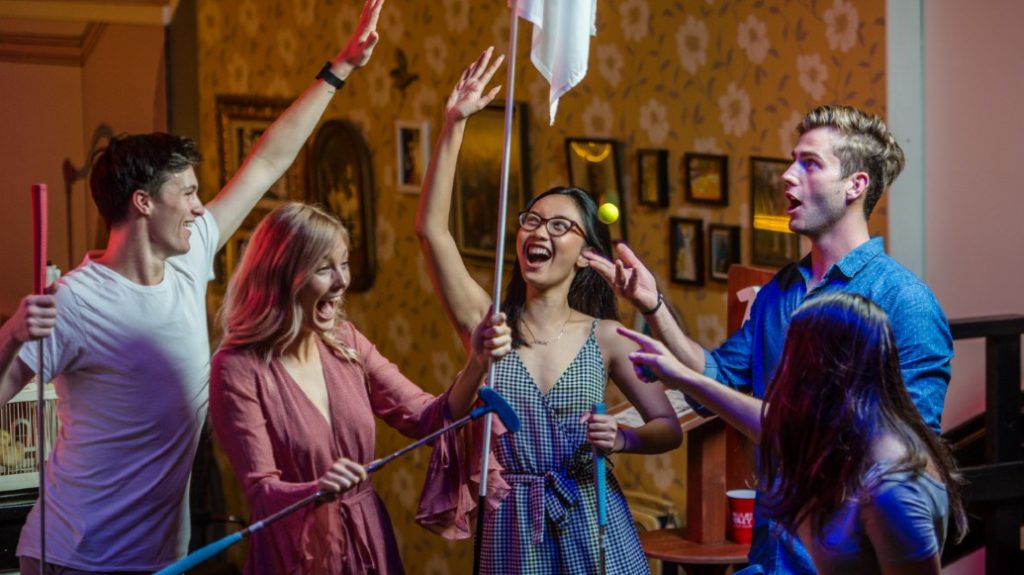 Karaoke works best with groups of five or more, plus it helps if you can split the cost of a booth and the hourly rate to hire it. Most karaoke bars have a selection of Japanese, Korean and English songs on the list. And even if you aren’t a big singer, you can always go along, order some drinks and snacks, and sit back and watch the show. The more people you have, the better.

Take your pick of pool and snooker tables or grab a booth to sing your heart out to your favourite karaoke song. This bar is grungy and the theme is retro Tokyo. They have student specials for pool and snooker before 5pm but their private booths for karaoke are cheap for groups every day.

Strike is the obvious choice for a plethora of options for entertainment including bowling, laser tag and karaoke. They have their own bar and the late night snacks are delicious. Get the most bang for your buck by going along to one of their deal nights – usually Friday and Sundays and if you prefer the late night crowd, they are open until 2am.

Grab a bunch of your friends and bring your own beverages if you like for a cheap night out in the city. These guys specialise in karaoke so you know you’ll be getting what you ask for, but don’t expect food or table service. Korean and Japanese songs are listed first for you to enjoy.

A well-known spot for karaoke and eats in Brisbane. Reserve a table, order a bunch of food and put your name down to get up and sing. If it’s your birthday they’ll take care of you, too. The service is good and works for large groups, but be aware you’ll be singing in front of the whole restaurant, so better warm up those vocal cords.

B. Lucky & Sons on Brunswick Street

This new establishment is a part cocktail bar and part video game arcade. It’s safe to say your night will go something like this: you rock up midway through the night, enjoy some arcade games like Mario Kart racing and some NBA hoops, maybe win some prizes and then enjoy cocktails and snacks at the bar. Everything is still shiny and clean here so get down and try it out. They have deals on most nights too.

Netherworld is a watering hole, a diner and home to a fab collection of vintage gaming relics. We’re talking 25 different arcade games, 15 pinball machines, lots of classic consoles and a bunch of board games that are perfect to play over a drink and some bites to eat. Still want more? Get in on the weekly movie and trivia nights.

Pincadia is a retro arcade bar with ’80s-style entertainment for the whole night. Take your pick from Donkey Kong, Pac-Man and Space Invaders between comfy tables for groups. You can order snacks like dagwood dogs and cheese burgers from the bar to keep your energy up – those games aren’t going to play themselves.

Slightly further afield in Toombul you’ll find Archie Brothers, which is the new kid in town for all you big kids. This circus themed bar includes dozens of different arcade games including VR games, bowling lanes, an XD theatre, dodgem cars and a shooting range. Plus the cocktail bar with boozy shakes and circus themed snacks with cheesey syringes are really the cherry on top. Added bonus: with each game you play, you win tickets that can be used to claim prizes. We’re sold.

Head along to this place on a Tuesday night for their signature Beer and Board Games Night where you can enjoy a selection of board games paired with delicious bite-sized dishes from the kitchen. Featuring pork belly, buttermilk fried chicken and arancini balls – there’s something for everyone here. These guys are famous for their gin, but beers are stacked on the menu too.

A cozy bar in the heart of West End that is more socially conscious than most bars in Brisbane. Bosc donates 20% of profits to charity so you can feel good when grab a classic board game and enjoy your drink such as their signature small-batch gins.

The End on Vulture Street

A West End classic, The End bar hosts local DJs and chilled vibes making it the perfect place for Thursday, Friday or Saturday night scrabble session. Roll in early to score a table for your crew and pull up a good old-fashioned board game.

The Montague Hotel on Montague Road

For pool, pizza, burgers and breezy patio hangouts, pick the Montague Hotel. If you are gluten free many of the dishes can be made for you at no extra cost. Their pool tables are nestled inside with their sports screens so you can keep up with the score and challenge your friends to a pool tournament at the same time.

The mixed decor of mismatched furniture and books across the walls and under the bar is just the level of quirk you would expect to find in West End. Archive’s got an epic food menu (including cheesy tater tots and sweet potato chips and chicken parmies), which go perfectly alongside a game of pool or table tennis. It’s a great environment for a relaxed game of pool on a Sunday. Don’t forget to check out their fabulously long beer menu.

If you’ve lived in Brisbane for a while now, chances are you’ve heard of Holy Moley, a mini-golf mecca meets bar inside what was previously a church. Students get great deals here and they have their own food truck for late night bites plus a bar with a funky selection of beverages. Check their website for Monday to Thursday specials.

As a new kid on the block iPONG has already built a reputation for themselves as Brisbane’s first interactive digital gaming bar. Located in Macgregor iPONG specialises in darts and beer pong – classics that they are amplifying with technology allowing you to keep track of your games digitally. With all the gaming you’ll be doing you’ll work up an appetite but never fear – their onsite kitchen and stocked bar will keep you going late into the night. Grab a group of friends and let your competitive side come out.

If you live at Student One, you’ve got a bunch of options right inside the building to entertain you. Challenge your friends to a ping pong or pool tournament, check out the foosball table or borrow some of the latest PlayStation games at Student One reception. For something a little bit less competitive, host a late night movie session in the Student One theatre.